Wilf the 5-year-old Miniature Schnauzer has been undergoing treatment at Vale Vets, a My Family Vets practice in Dursley (Gloucestershire), after sustaining a mysterious wound that one vet described as the ‘biggest she’d ever seen.’

It’s believed his severe wounds came from an adder bite. Wilf developed major skin damage that affected his chin, neck and chest, and spent a whole 12 days in the practice before it was deemed safe for him to leave.

He now visits Vale Vets Dursley 3-4 times a week and is steadily recovering.

For Wilf’s owners, the story began when they returned from a holiday in Brittany, France on 25th July. Wilf had been staying with close relatives in North Hampshire.

‘We were due to pick him up when my in-laws phoned,’ says Wilf’s owner Helen Lewis, a 50-year-old school teacher and mother-of-two, who lives in Dursley. ‘They told us something was up – we drove over there to collect him and we could tell right away that he wasn’t himself.’

‘Although Wilf loves his visits to Hampshire, he’s usually ecstatic when he reunites with us. This time, he barely moved – he didn’t even respond to food or biscuits.’

Wilf’s owners acted quickly and brought him to Vale Vets, where they’ve been happy clients since Wilf was 8 weeks old.

What made Wilf’s case unusual was that he wasn’t brought into the practice with severe skin damage – it developed a few days after he’d got there. After several tests and treatments, during which an array of illnesses – including meningitis – were ruled out, Wilf’s condition appeared to be the result of a nasty adder bite. 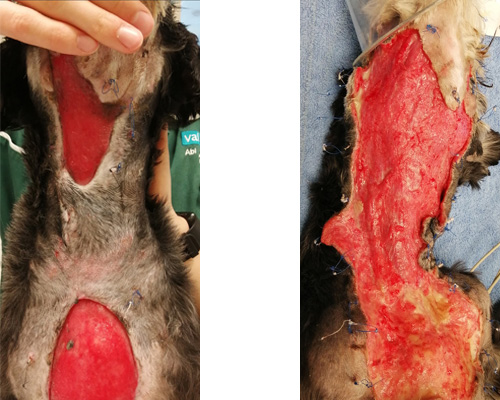 ‘The waiting and not knowing was just awful,’ says Helen. ‘But the practice were absolutely fantastic. When Wilf’s symptoms were at their worst, they called me twice a day to keep me informed. They explained everything patiently, and in plenty of detail.’

Helen was impressed with everyone at the practice who worked on Wilf’s case, especially Ella Fielding, an Advanced Practitioner in Small Animal Medicine, who described Wilf’s wounds as one of the biggest she’d ever seen:

‘There are not enough words to describe how fantastic Ella is,’ says Helen.

Someone slightly more deserving of praise is Wilf himself, whose bravery has impressed his owners, as well as the staff at Vale Vets.

‘He’s gone through so much, being fed through a tube, various sedatives. The ordeal began back in July and he still has wounds beneath his chest today.’

But has Wilf let it dampen his spirits? Of course he hasn’t!

(That is, if you pardon his ‘expert sulking’ when he needed to wear a buster collar at home.)

‘Honestly,’ says Helen. ‘He’s amazing. After all he’s been through, he manages to remain his sociable, gentle self.

‘We still visit Vale Vets 3-4 times a week for him to have his dressings changed – and he loves going there!

‘It’s a testament to the wonderful care he’s receiving – it’s second to none and we couldn’t be more grateful.’

And Helen isn’t the only one full of praise for her adorable pooch. The Vale Vets team describe him as ‘an incredible fighter who’s seriously worked his way into our hearts. He’s surpassed all of our expectations and is well on the way to a complete recovery.’

Looking for a vet in Dursley, Gloucestershire? Vale Vets Dursley are part of My Family Vets, providing exceptional care for pets and outstanding service for their owners.

Owners fear for Dachshund’s life after he eats chewing gum