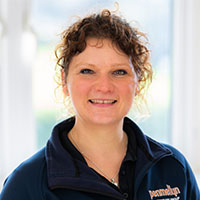 She has particular interests in gastric ulceration and respiratory disorders, but enjoys being able to work on a variety of medical problems from weight loss, liver disease, laminitis to name but a few.

Outside of work, Jenny pretends to be a hobby farmer - looking after her small herd of rare-breed sheep and a few Gloucester Old Spot pigs with her partner.

Mare foaling at home can be a joyous experience, if you’re prepared for it.

Caring for a newly born foal

This means that once a foal has been born, you’ll need to pay close attention, especially during their first 24 hours.

After the foal has been delivered

After the birth, try to keep intervention to a minimum. This will make sure you don’t compromise the mare-foal bond. You may find that the mare is lying down after delivery, and that the foal’s legs remain inside her for a few minutes.

When either the mare or foal moves, the umbilical cord will break at its weakest point – never cut/clamp it. The piece of umbilical cord attached to the foal should be bathed in a 0.5% chlorhexidine/iodine and alcohol solution. Repeat this process for a few days until it’s dry.

When should a foal first stand up?

Typically, a new foal should be able to stand up within 2 hours of birth.

If the mare remains laid down, move the foal to her head so she can bond with them. She may lick their head and at this point, you should find that the foal can support themselves on their chest. They’ll soon attempt to stand up, and should be successful after a few attempts.

When should they first suck?

You should find that the foal is quick to search for milk as soon as they stand up for the first time. It may take several attempts for them to feed successfully – you may need to guide them, or to encourage the mare to stand still.

If the foal doesn’t feed within 4 hours of birth, contact your equine vet as soon as possible. Failure to feed in these initial hours can lead to health problems.

Caring for a newly born foal

The new foal will be given a tetanus anti-toxin injection to protect them for the initial months. This will need to be followed up with a vaccination to ensure continuity of care. Your equine vet will be able to advise further.

Most foals will feed up to 7 times an hour whilst they’re awake. Typically, they’ll gain 2kg of bodyweight per day during their first week.

You may find that the foal’s first faeces is very dark and firm – this is known as meconium. As the foal continues to feed, their faeces should become gradually softer. The foal should urinate within 8 hours of birth. If you’re concerned about their ability to pass faeces, contact your equine vet right away.

You should find the foal to be very curious; they’ll interact freely with their mother and with humans. Contact your equine vet if this doesn’t seem to be the case. It’s also a good idea to call your vet if you notice any of these characteristics:

Even if everything seems fine, it’s a good idea to have the new foal and their mother checked by a vet – ideally within 12-24 hours of birth.

The vet will check:

And of course… that the foal is in good health! This will include checking their eyes, heart, lungs, palate and so on.

For more help and advice on mare foaling, the bond between mare and foal or any other aspect of your horse’s health and wellbeing, have a chat with your local equine vet.

Cat pregnancy: how to tell if your cat is pregnant

Bringing home a new puppy: how to introduce a dog to your home

How to crate train a dog: a guide to puppy cage training