Bonnie the Cocker Spaniel has reunited with her owners after she was stolen from their Durham home in May 2014 – six and a half years ago!

Bonnie’s owner Simon Hall, 50, was driving home from the local hardware store when he received the phone call: Bonnie had been taken to My Family Vets at Terrington Veterinary Centre after being found in a nearby Norfolk park – some 200 miles away from home!

After an emotional trip across the country, Simon, his wife Caroline and their daughter – who was just 14 when Bonnie went missing – were reunited with their beloved pet on Saturday 21st November, one day before the spaniel’s tenth birthday. 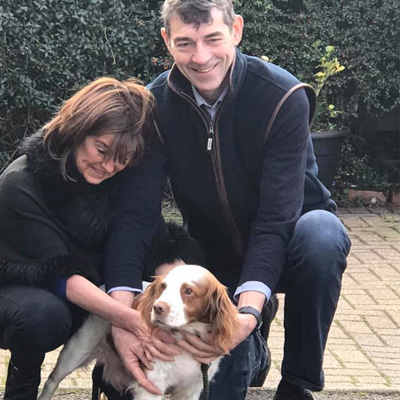 The team at Terrington Vet Centre believe Bonnie was stolen by illegal puppy farmers and used for intensive breeding. It’s estimated she gave birth to her most recent litter just 2 months ago.

‘We didn’t know whether to believe it at first,’ says Mrs Hall. ‘But when we saw the pictures, we knew straight away that it was her.’

It’s common for a missing dog to be reunited with their owners after 1-2 days. But how does it feel after 6 and a half years?

‘Just fabulous. When she was first stolen, we were relentless and never stopped looking for her. As the years went by though, there came a point where searching would cause nothing but heartache. Around 2 years ago, we stopped checking the lost dog websites.

‘It caused so much upset – especially as our children were just 12 and 14 at the time. The not knowing was awful. It’s sad when a dog passes away but when they’re stolen, it’s a different emotion altogether.

‘Now that we have her home again, we’re just so happy. I still can’t properly believe it.’

Bonnie wouldn’t have had her happy ending if she wasn’t microchipped. What would you say about the benefits of microchipping?

‘Oh, it’s imperative! It’s been a legal requirement for over 4 years now, which sounds great but means there could be thousands of 4-year-old dogs out there who aren’t yet microchipped.

‘It wasn’t a legal requirement when we first got Bonnie, but we were lucky to have got her from a responsible breeder who advocated microchipping.

‘I’d implore all owners to have their pets microchipped – just in case. Even if they never wander off or they’re too old to breed from.’

Any advice for owners in a similar position?

‘Never give up hope. Keep on looking, keep circulating photos and posters every so often and when you’re with your pet, make sure you know where they are at all times.’

And finally, how was Bonnie’s birthday celebration?

‘She spent all day on a comfy bed in front of the fire!

‘It’s just lovely to have her home. She was a bit tentative when she first walked through the door but after a few hours, she was back to Bonnie. She’s queen of the castle now.’

Looking for a vet in King’s Lynn? Terrington Vets are part of the My Family Vets network, providing exceptional care for pets and great service to their owners.