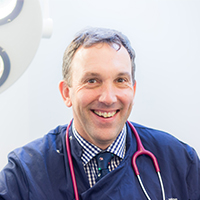 Jon is Clinical Director at Fields Vets in Newport.

His interests include all aspects of small animal medicine and surgery - Jon works by the mantra that you should never stop learning!

In his spare time, Jon likes to climb mountains and go on bike rides with his wife and children.

As a dog lover, you know there’s something special about your canine companion – and scientists agree. Here are ten fun facts about dogs that might surprise you.

Scientists believe dogs have similar sleep patterns to humans, and that small breeds of dog dream more than large breeds. Just as humans stir and twitch during REM sleep, dogs do the same. So if you’ve spotted your terrier twitching in his sleep, he’s probably dreaming.

His nose has millions more scent receptors than the average human, which is why dogs are sometimes used to sniff out drugs, explosives and even dead bodies. Carefully trained dogs can even be used to detect cancer cells in humans.

James Walker, former director of the Sensory Research Institute at Florida State University, puts this into perspective: “If you make the analogy to vision, what you and I can see a third of a mile away, a dog could see just as clearly more than 3,000 miles away.”

3)    Just like a fingerprint, no two dog noses are alike

Every dog’s nose has its own pattern, and is as unique as a human fingerprint.

4)    Touch is the first sense your dog develops

The first experience for a puppy after being born is being cleaned by his mother – a process that stimulates the nerve endings and gets the puppy’s blood flowing. From this moment onwards, touch is a vital part of socialisation, which helps the dog to bond with both humans and other dogs.

Scientists have found that most dogs have the intelligence of a two-year-old child. As well as understanding up to 200 words, they’re clever enough to manipulate humans and other dogs for reward. Of all the breeds of dog, border collies have been found to be the smartest.

6)    Puppies are born deaf and blind

If you’ve ever seen a puppy being born, you’ll notice he’s born with his eyes closed. Newborn dogs are still developing, and most puppies open their eyes and begin to respond to noise after around ten days..

“Dogs are sometimes used to sniff out drugs, explosives and even dead bodies. Carefully trained dogs can even be used to detect cancer cells in humans.”

Many dog owners have incredible stories to tell about how their dog appeared to have a sixth sense… in fact, according to a 2010 poll, a massive 67 per cent of pet owners reported their pets acting strangely before a storm, while as many as 43 per cent said their pup behaved oddly immediately before something bad happened. This has been utilised where some epileptic people can rely on their dog’s sixth sense can indicate if a fit is about to occur in their owner.

Scientists don’t know exactly why this is, but while it’s easy to dismiss it as superstition, it could pay to listen to your dog’s weird behaviour. You never know – it could save your life.

Though all breeds of dog age differently – with, for example, large dogs maturing faster than small ones – on average, a one-year-old pup has the same physical maturity as a 15-year-old teenager!

9)    Your dog can smell your feelings

Feeling blue? Don’t be surprised to receive extra love and attention from your dog. Scientists have discovered that your pup can detect subtle changes in your scent, and can use this to determine how you’re feeling. In a similar way, dogs can sense certain bodily changes – such as illness, and even pregnancy – in their owners.

10)    Your dog only sweats through his paws

Ever noticed that your dog’s paws are a little smelly? That’s unsurprising when you learn that dogs only sweat through their paws. While we humans have sweat glands over most of our bodies, your dog’s only sweat glands are located between the pads of his feet. For this reason, dogs cool down by panting with their mouths open, instead of sweating. A panting dog takes between 300 and 400 breaths each minute, compared to his usual 30 to 40.

For expert advice on all things canine, get in touch with your local vet.

The American Bulldog: is it the right breed for you?

The Jackapoo: is it the right breed for you?