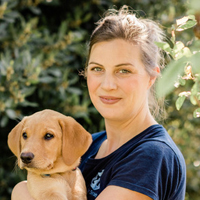 Rosie is a qualified Clinical Animal Behaviourist with a degree in Zoology & Psychology from the University of Bristol & a Post-Graduate Diploma in Companion Animal Behaviour Counselling from Southampton University.

She is a full member of the Association of Pet Behaviour Counsellors, a member of the Association of Pet Dog Trainers (No. 1006), and registered as both a Clinical Animal Behaviourist & as an Animal Training Instructor with the Animal Behaviour & Training Council (the regulatory body that represents trainers & behaviourists to both the public & to legislative bodies).

Bonfire night can be a nightmare for pets and owners alike. It’s distressing enough for us humans, but at least we can anticipate it, understand why it’s happening and know that it will all be over soon… unlike our dogs.

The idea behind sound therapy

Thankfully though, there are measures you can take to desensitise your pet to the noises of fireworks. One of these measures is known as sound therapy. Let’s take a closer look…

Why are some pets more scared of fireworks than others?

When puppies reach 3 weeks of age, they enter what’s known as an essential socialisation period, which ends when they’re about 4 months’ (16 weeks) old. Every external entity – whether it’s people, animals, smells, sights or noises – that the dog encounters during this period will have a large effect on their overall personality in later life.

The more objects, people and environments a young dog is exposed to, the more ‘well-socialised’ they become. Well-socialised dogs tend not to be as fearful and suspicious of changes that take place in their environment.

The idea behind sound therapy

The idea is simple: if dogs can become familiar with firework noises, they won’t be as frightened of them. This term is known as ‘habituation’: animals learn to accept loud noises as a standard aspect of their environment, and therefore not something to be scared of.

First off, bear in mind that it’ll take at least a month to habituate your dog to the sounds of fireworks. Aim to start sound therapy well in advance of Fireworks season – preferably in late August or early September.

Note: If your dog already has an established fear of fireworks or loud noises, the process of sound therapy will take a lot longer and will more than likely require the help of a behaviourist. Ask your vet for more details.

Start off slowly (and quietly)

You can find firework noises on a variety of websites – ask your vet if you’re lost or would like some recommendations. Begin playing them for roughly an hour a night and at a very low volume. With each day, simply play the firework noises for a little while longer and on a slightly higher volume.

If your dog displays unconscious awareness of the noises (ears twitching, eyes widening or head propping up) and then return to what they were doing before the noise started, treat this as a positive sign.

Increase the volume and the length of session gradually. Your pet will eventually get used to the noises and begin to associate them with their normal environment.

What if my pet is scared?

If your pet reacts fearfully, stop the firework sounds for that night and begin again the next day on a lower volume. If the volume is already really low, try playing the sounds from another room.

The trick is to start small and to increase your pet’s exposure so gradually that they aren’t aware of any changes at all. If your pet is overly fearful from a very low volume, you may need the help of a professional canine behaviourist.

For further help and advice on how to calm an anxious pet during Firework season, have a chat with your local vet.

How to crate train a dog: a guide to puppy cage training