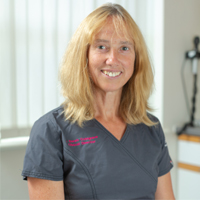 She was elected to IVC Evidensia's Clinical Board in 2018, and also sits on the Patient Safety sub-committee.

If you’ve ever had an ear infection, you’ll know there’s nothing like the pain of having sore ears. But did you know that cats are just as susceptible to ear infections as their owners? In fact, feline ear infections are a common conditions treated by vets.

So, how do you recognise if your cat has an ear infection – and what should you do about it? We take a look at the causes and symptoms of feline ear infections.

Is my cat likely to get an ear infection?

Much like us humans, some cats are more susceptible to ear infections than others. Some naturally produce more oil and wax than normal, while others have too much hair inside their ears – both increase your cat’s risk of getting an ear infection.

Ear infections can happen to cats of any age or breed, though cats with allergies, diabetes, or a weakened immune system are more at risk. Breeds with small ears, such as Persians or Himalayans, are also more likely to suffer from ear infections.

Recognising the signs and symptoms of cat ear infections

If your cat develops an ear infection, you may notice the following symptoms:

Feline ear infections are often caused by a build-up of bacteria or yeast in your cat’s ears. They can also be caused by:

The anatomy of your cat’s ears

While human ear canals are horizontal, your cat’s ear canals are mostly vertical, making it easy for debris and moisture to build up and cause infection.

The lining of the ear canal produces oil (sebum) and wax, which can combine with hair, moisture, and debris to become a feeding ground for yeast and bacteria. When these build up, it can lead to inflammation of the ear canal, and the associated symptoms.

“Your cat’s ear canals are mostly vertical, which makes it easy for debris and moisture to build up and cause infection.”

The three types of ear infections in cats

Vets classify ear infections according to the part of the ear that’s affected:

Inner ear infections can be very serious. Left untreated, they can lead to loss of hearing and balance. Infections in the outer or middle ear are more common, and can be caused by an immune disorder, or an abnormality in the structure of the inner ear.

Your vet sees dozens of cats each year that are suffering from ear infections, and will recommend the best and most effective treatment.

He or she may use a swab to take a sample of the discharge or pus coming from your cat’s ears – a painless process called an ear cytology that can establish whether there are mites, yeast or bacteria present.
It may not be possible to prevent feline ear infections, but your vet will give you tips on the best way to reduce the risk.

For expert advice on ear infections in cats, contact your local vet.