Bouncer the 9-year-old Labrador retriever was rushed to My Family Vets at White Cross Vets, Eccleshill West Yorkshire, for the removal of a huge lump from his side and hind leg.

Weighing in at a whopping 3.3kg and having rapidly swollen to the size of a football, it wasn’t just any old lump – it was a lipoma, the largest Anita Fox, Veterinary Surgeon at White Cross, had ever seen.

Bouncer’s owner Zoe McNulty, a 37-year-old NHS Team Coordinator from Greengates in Bradford, first spotted the lump towards the end of 2019. Back then, it was small and didn’t seem to be expanding in size.

A few months later, just a week before the Covid-19 lockdown was brought into force, the lipoma began expanding rapidly. 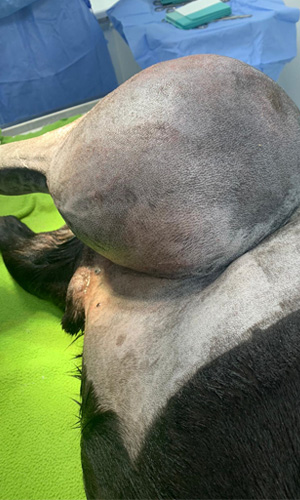 Bouncer didn’t show any signs of distress while the lipoma was small but as it grew, the Labrador began struggling to walk, and ended up collapsing whilst out with his owners, who acted quickly and brought him to White Cross Vets.

A biopsy revealed the lump to be a benign lipoma that’d need to be surgically removed.

The surgery, originally predicted to take 3 hours, was a huge success. The lipoma was removed in one piece and the procedure lasted just one and a half hours.

‘The vets called us to let us know everything had gone to plan, and we were so relieved,’ says Zoe, who’s a mother of 4 children and one other dog – a Shar Pei named bear.

‘Bouncer’s an adorable dog with such a caring nature. He’s a huge part of our family.’

Bouncer, in true Labrador spirit, was not about to let his surgery get him down. ‘He was back to his normal, bouncing self just a few hours after the operation,’ says Zoe. ‘The only difference was his scar!’

Lipomas affect one in 50 dogs each year in the UK. They’re mostly harmless, but because of how big they can get and how fast they can grow, they can be scary for owners.

Read more: Lumps and bumps on dogs: found a lump on your dog?

To make matters worse for Zoe, Covid-19 regulations meant that she couldn’t have Bouncer’s lipoma looked at until his condition was classed as an emergency.

Despite the fear and uncertainty caused by the coronavirus, Zoe was impressed with the service she received at White Cross.

‘I can’t thank them enough,’ she says. ‘They were great from the start, explained everything to us and generally went above and beyond my expectations.’

Meanwhile, Bouncer is back to being a happy, healthy and bouncy Labrador – enjoying his forest and beach walks.

‘He has other lumps,’ says Zoe, ‘which are common in Labradors. Hopefully they won’t grow the way this one did!’

Looking for a vet in Eccleshill? White Cross Vets are part of My Family Vets, providing exceptional care for pets and outstanding service for their owners.

Schnauzer recovers from ‘biggest wound the vet had ever seen’