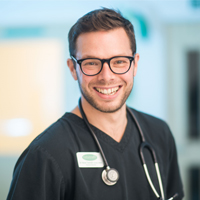 Dave is Clinical Director at Bath Vet Group and Natures Vet in Somerset.

He lives near Frome with his wife, their two children and their ginger cat, Baker.

John is Clinical Director at Oakfield Vet Group in Atherstone.

He has a special interest in soft tissue surgery, diabetic control and orthopaedic work.

John lives in Berkswell and has three rescued pets of his own: a labrador called Mollie, a collie called Briar and a cat called Ron.

Do you often walk your dog through areas of long grass?

They could be at risk of Babesia – a parasite spread by ticks.

Symptoms of Babesia in dogs

Babesia is a type of parasite that causes an infection of the red blood cells – this infection is known as Babesiosis.

Babesia comes in many forms, some of which affect dogs and some don’t. The seriousness of the infection varies depending on the form of Babesia but in extreme cases, Babesiosis can be fatal.

The most common culprit for the spread of Babesia is ticks. Ticks usually reside in wild grassy areas during the summer months, and it’s at this time of year that Babesiosis is most common.

Affected dogs can pass on the infection to other dogs. Pregnant bitches may pass it on to their pups before birth, for example, or the parasite may pass from dog to dog if one bites the other.

As with most conditions, younger puppies and elderly dogs are at a greater risk.

Symptoms of Babesiosis in dogs

Once affected, it’s difficult for the Babesia parasite to be removed from the dog’s system completely. However, medication can be successful in keeping symptoms at bay.

If your dog displays any of the symptoms listed above, contact your vet as soon as possible so they can commence with treatment before the infection gets worse.

As with many illnesses, prevention is better than cure! Make sure your dog is up-to-date with their parasite prevention treatments. If you’re venturing through areas where the grass is tall and unkempt, be sure to check your dog thoroughly for ticks – paying close attention to their legs, the underside of their belly and behind their ears.

If you spot a tick, remove it as soon as you can or contact your vet if you don’t feel comfortable doing so. The tick must be attached and feeding from your dog for a minimum of 24 hours before Babesia can spread.

For more help and advice on the Babesia parasite, Babesiosis, keeping your dog safe from ticks or any other aspect of their welfare, have a chat with your local vet.

Fleas and dogs: how to keep your dog safe and itch-free

Cats and fleas: does my cat have fleas?