A family who bought a dog to help them cope with a devastating cancer diagnosis nearly saw it die after the pup contracted the highly-contagious disease, parvovirus.

Mum-of-three Stephanie Wilkins, from Bath, has incurable breast cancer and cocker spaniel puppy Cooper was supposed to bring some happiness for the children.

Normally puppies receive protection through routine vaccinations, but Stephanie was duped by forged vaccination papers from the breeders. As a result of the false documents, the nine-week-old puppy developed parvovirus, which is frequently fatal.

Stephanie, 34, faced the agony of being asked if she wanted to pursue Cooper's intensive treatment day after day, despite the slim chance of him pulling through. But he beat the odds and pulled through thanks to round the clock care at Bath Vet Group, part of the My Family Vets group of practices. 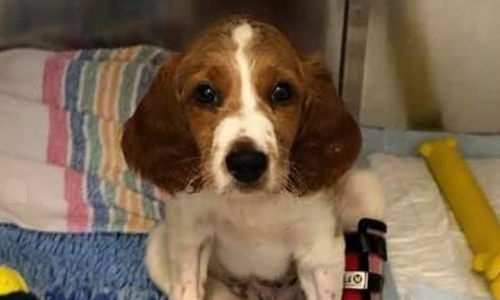 Cooper’s case was just one of a massive increase in parvovirus cases, with vets reporting a surge in suspected cases through lockdown. My Family Vets have found that up to 45% of registered pet owners hadn’t got vital vaccinations and boosters – which help protect dogs from potentially deadly diseases like parvovirus.

Now hospital worker Stephanie is backing vets calls for owners to ensure their pet gets vaccinated and to seek help straight away if they see their puppy becoming unwell.

Stephanie and husband David got Cooper for children Scarlett, James and Sebastian a few weeks ago.

“I’ve been dealing with breast cancer for the past five years,” said Stephanie. “It has come back, and I’ve now been told it’s incurable, so we’ve had a lot to deal with as a family. We wanted to have something positive to focus on for the children and Cooper is our first family pet.”

The puppy was advertised online in Wales and, although they did checks and tried to be alert when picking him up, they were victims of a puppy farm scam.

It was so elaborate, a subsequent visit by the RSPCA found the supposed home address of the breeder had merely been rented to dupe buyers.

The vaccination record was also fake and within a day of getting him, Cooper became seriously ill.

“We thought it was just the new surroundings,” said Stephanie. “But he became really quiet and wouldn’t eat and when he started having bad diarrhoea, we knew we had to get him help.” 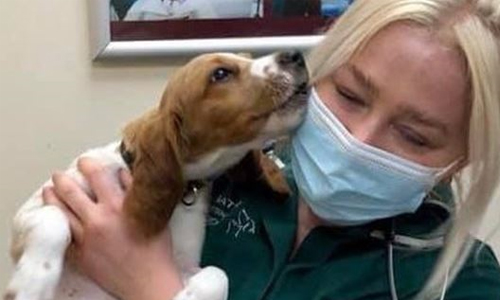 They took Cooper to Bath Vet Group where he was diagnosed with parvovirus and vets realised the vaccination papers weren’t genuine. The team of vets and nurses became suspicious about the vaccination card when they saw the vaccine had one vaccine sticker, but there was no date or signature.

Even after these steps, recovery is far from certain.

“He was so ill we were told he probably wouldn’t survive which was horrendous,” said Stephanie. “The vets said they would try everything they could if we wanted, and we just felt we had to give him a chance.

“When I went in to see him, he looked awful, as if he just wanted to die and I didn’t want him to suffer. But every time he got really bad and it looked as if every hour might be his last, he would stabilise again.

“He’s a real little fighter and I know everyone at Bath Vets took a shine to him and were willing him on.”

Thankfully, after a roller coaster 10 days, Cooper was well enough to go home and he’s now putting on weight and regaining his strength. 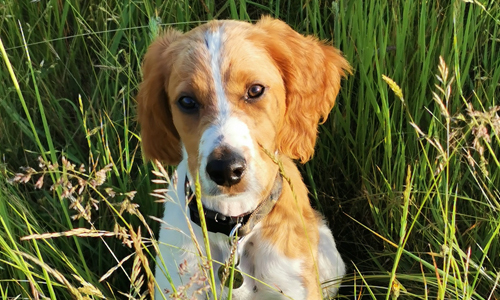 “I think with everything we’ve had going on, we missed some warning signs,” said Stephanie. “You’ve got to know everything is genuine and definitely make sure you get all of the vaccinations you need.”

Vet Giulia Grenga from Bath Vet Group said: “Cooper is really lucky to have recovered from  parvo, which can often be fatal.

“Sadly, over lockdown, there has been a surge in parvo cases in the UK despite there being an effective vaccine available.

“We urge everyone to beware of unscrupulous breeders taking advantage of increased demand for pups. And to ensure your dogs, whatever age, are up to date with their annual vaccinations.”

Want to know more about vaccines?

Read our article on puppy vaccinations to learn everything you need to know about keeping your dog safe from disease.

How to... Cut your rabbit's nails