Despite the challenges that have been thrown at them throughout 2020, the team at My Family Vets at Purton Vets, Swindon, haven’t lost sight of their commitment to helping local wildlife.

‘We feel it’s our duty to help, really,’ says Debbie Leonard, Purton’s Head Nurse who’s been with the practice since 2009.

‘Not only that, but the cases are usually really interesting and educational for us,’ she says, shortly after explaining that she once accompanied a vet out to a nearby river to treat a local deer that had been attacked by a dog.

For many years, the team have worked closely with Oak & Furrow Wildlife Rescue Centre, the RSPCA branch for North Wiltshire. The arrangement has led to the team treating an array of creatures, including hedgehogs, foxes and the occasional aquatic bird.

This hedgehog suffered balloon syndrome – a rare condition that occurs in hedgehogs when gas gets trapped under their skin, usually following an injury or infection.

‘He really did look like a balloon,’ says Debbie as she recounts the procedure, which involved carefully ‘deflating’ the animal with a needle. 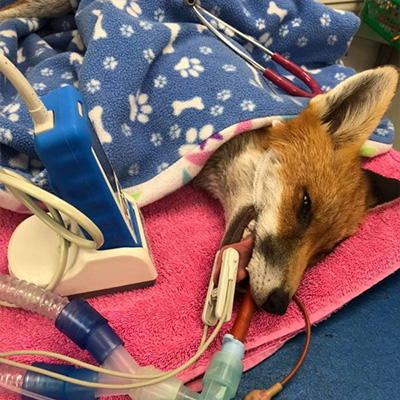 This fox had sustained a large wound on his back foot. The team repaired it under anaesthetic, but needed to amputate a toe after the wound reopened a few days later.

‘Repairing wild animals’ wounds can be difficult to manage,’ says Debbie. ‘We treat a fair few foxes and sedate them to cause as little stress as possible.’

This beautiful creature is a cormorant, an aquatic bird that dives into water to hunt for fish. It was rushed into the practice after the Oak & Furrows team found it with a three-pronged fish hook stuck in its beak.

After further investigation, the team found that a second fish hook had made its way down into the bird’s oesophagus. 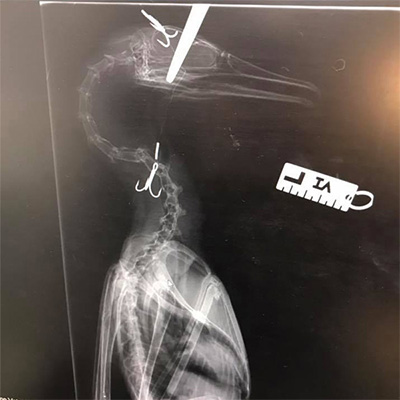 Although the surgery was a success, the damage done by the hooks was too severe, and the bird didn’t survive.

‘It can be devastating at times,’ says Debbie, ‘but we have to do the very best we can to help each of these animals.’

Why is it important to you to look after wildlife where you can, as well as household pets?

‘The way we see it, our duty to do the very best we can applies to all animals, wild or domestic. We have a lot of respect for the work done by Oak & Furrows; they’ve been a tremendous help to us over the years when injured wild animals have been brought in to the practice.’

What are the benefits of treating wildlife?

‘It means you’re kept on your toes and you’re always learning! It’s very exciting, and always rewarding when you know you’ve done your best for an animal and helped it recover.’

How does treating a wild animal compare to a domestic pet?

‘It’s usually more of a challenge. We don’t see wild animals for routine appointments, they’re always emergency cases so there’s lots of shuffling around, making space and keeping them away from the domestic pets.

‘Wild animals aren’t used to being handled so we use sedation as often as possible to minimise their stress.

‘Overall, it’s a great challenge and it’s amazing to be able to help when we can.’

Looking for a vet in Purton or Cricklade, Swindon? Purton Vets are part of My Family Vets, providing exceptional care for pets and compassionate service for their owners.

Schnauzer recovers from ‘biggest wound the vet had ever seen’

Owners fear for Dachshund’s life after he eats chewing gum